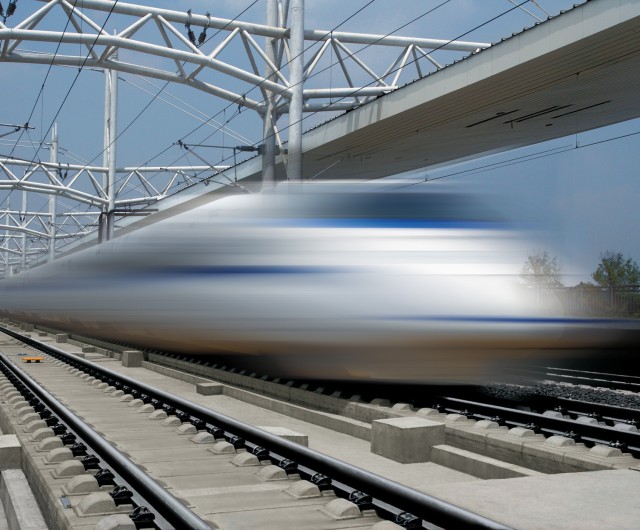 High speed lines make rail travel attractive, because they save time. In many places, trains which go 250 km/h or faster provide the first conditions in which people are willing to take the train rather than the car.

Increased speeds increase the amount of stress the tracks are subjected to – resulting in wear and tear and increased maintenance. This is exactly where we apply our solutions for high-speed tracks with speeds of over 250 km/h: they ensure absolute track stability, even at maximum speed. Speed records are proof of this.

At 1,318 km, the track between Beijing and Shanghai is one of the longest high-speed lines in the world. Our rail fastening systems for slab tracks permit speeds of over 300 km/h here. A speed of 486 km/h was reached during test operations.

A new speed record was set on April 3, 2007: at 560 km/h the Vossloh switch on the LGV Est européenne is the fastest traveled on switch ever used in the world. So far Vossloh has provided over 1,500 of these high-speed switches from the segment V-speed for networks worldwide. Because they are designed for operational speeds of over 300 km/h, they must be particularly safe and reliable.

High speeds are a stress test for rail fasteners; the track – whether ballast or slab track – must absorb this energy. With physically optimized tension clamps and weather-resistant high-elasticity components, our custom fastener solutions make sure passengers reach their destination comfortably and safely. The entire system thereby protects the track superstructure and reduces maintenance costs.

This is demonstrated by current high speed projects in France, Turkey and Morocco. The local operators are also generating tangible synergy effects thanks to Vossloh: on the French high speed line LGV Sud Europe Atlantique between Tours and Bordeaux, Vossloh provided 100 complete switches along the 340 km ballast line as part of a coordinated mobility solution.

Full speed ahead, even for maintenance. With “High Speed Grinding (HSG)”, Vossloh has developed a completely new approach, specifically for preventive grinding. Its unique selling proposition is the high grinding speed of 80 km/h, which allows flexible use as part of a standard train journey within the regular train schedules.

Explore our portfolio of rail infrastructure solutions in our product finder. By selecting product groups and further filters, you can find the right product for your needs.

We’re happy to personally answer any questions you have about any aspect of Vossloh.